The history and development of Tomar is closely tied to the Knights Templar who were gifted this area as reward for their part in Dom Afonso Henriques' campaigns against the moors in 1159. The influence of the Templars and their successors upon Tomar is evident all over the old town. After a brutal suppression of the Templar Order across Europe in the early 14th century, in Portugal the order transformed into the Order of Christ on the initiative of King Dom Dinis. The great wealth they had inherited from the Templars played an essential role during Portugal's age of discovery. Tomar is situated on the Nabao river, a tributary of the Tagus (Tejo) river with the old town occupying the west-bank. 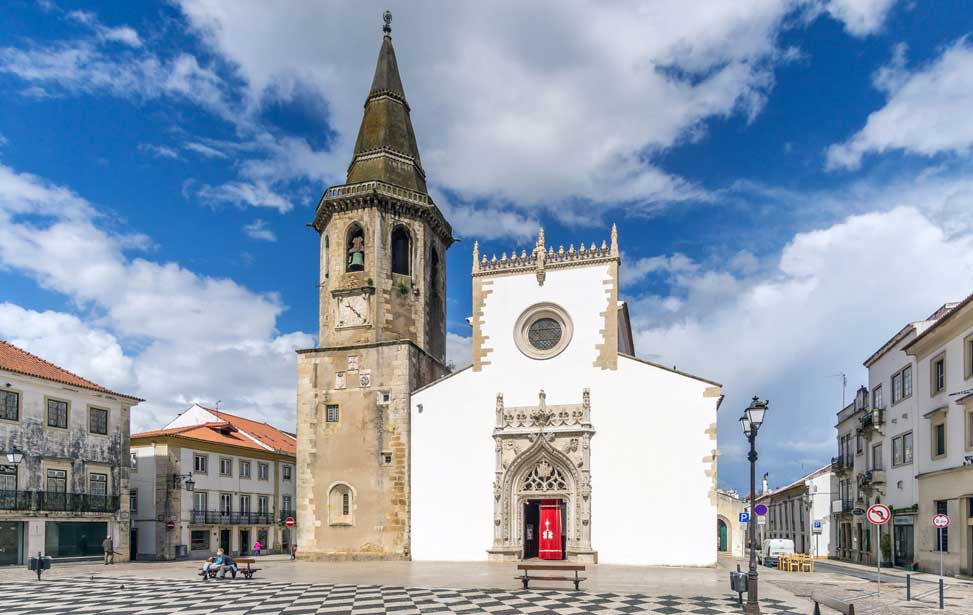 At the heart of the old town is the delightful Praça da República square which is an idyllic spot for lunch or a coffee whilst taking in the sights. The square is paved with a diamond patterned tiling and over-looked by a statue of the town's founder, Gualdim Pais. Here are some impressive 17th Century buildings such as the old town hall, with it's charismatic loggia of three arches.

Opposite Tomars' old town hall on the Praça do República is the recently restored Church of São João Baptista (John the Baptist) which has origins from the 12th century and was a meeting place for the Knights Templar. However most of the present construction was re-built in the 15th century under the sponsorship of Dom Manuel and completed in 1510. The Manueline ornament on the north door sports boars, dogs and wild asses whilst the western entrance is more prosaic. The adjoining bell tower has a distinct octangular profile on a square base. Inside hanging on the side aisles are six panels painted by Gregório Lopes, one of 16th-century Portugal's finest artists. One panel is a representation of The Last Supper.

The main attraction of Tomar stands on a wooded hill over looking Tomar and is one of Portugal's five most significant buildings. Standing next to the entrance of the convent is the mystical 12th Century Templar Castle it's crenellations guard the route between Santarém and Coimbra. Gualdim Pais, Master of the Knights Templar, began construction of the castle on 1 March 1160, it's irregular walls extended throughout time to encompass the Charola or Round Church, the living quarters for the Knights Templar to the north and the parade ground or interior courtyard and the area once occupied by the residents of the fortified town to the south.

One of the outstanding examples of Templar architecture dating from the 12th and 13th centuries it's distinctive polygonal structure, with eight sides on the inside becoming sixteen sides on the exterior, was inspired by the Church of the Holy Sepulchre in Jerusalem. As Master of the Order of Christ, the order that replaced the Templars, Henry the Navigator overlooked the first alterations of the building and built the chapel on the east wing of the Charola and dedicated it to St. Thomas á Becket. King Manuel I made further additions between 1495 and 1521 when the sixteen sides of the external wall were opened on the east side, resulting in the large triumphal arch that was to link the Charola to the Manueline church. 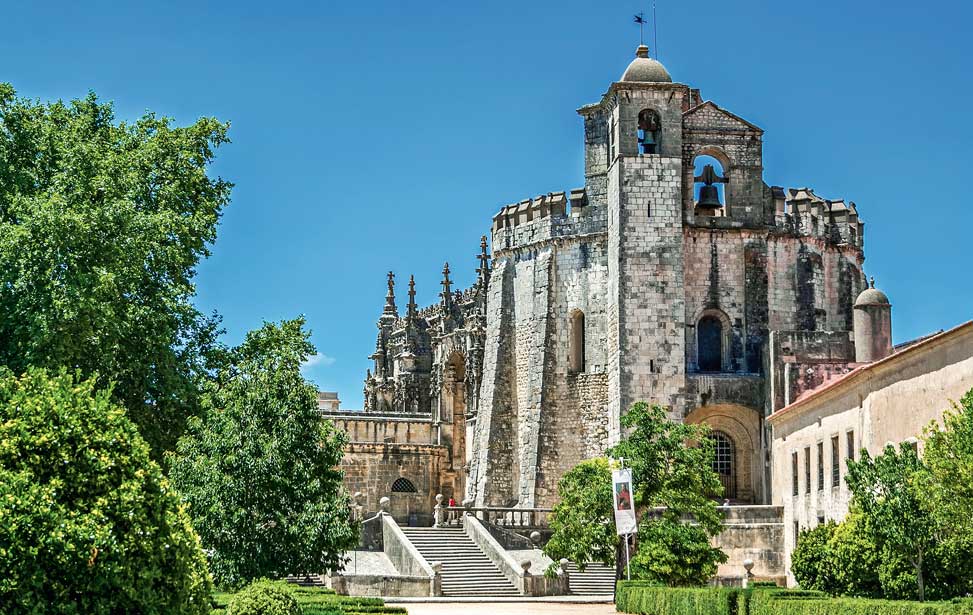 The Chapter House Window, an impressive example of Manueline architecture by Diogo de Arruda was added to west façade of the Manueline church between 1510 and 1513. Known in Portuguese as Janela do Capítulo it is overlaid totally by maritime imagery. Found within the elaborate design are motifs representing sea shells, coral, interwinding ropes and the royal coat of arms. One has a feeling there's a secret message encoded within the stonework.

The original Cloister Principal was built between 1530-1533 by João de Castilho only to be partially rebuilt during the reign of João III and completed in 1562, the Italian architect Filipe Terzi completed the ceiling on the Ceras terrace and is considered an opus magnum of the Renaissance. 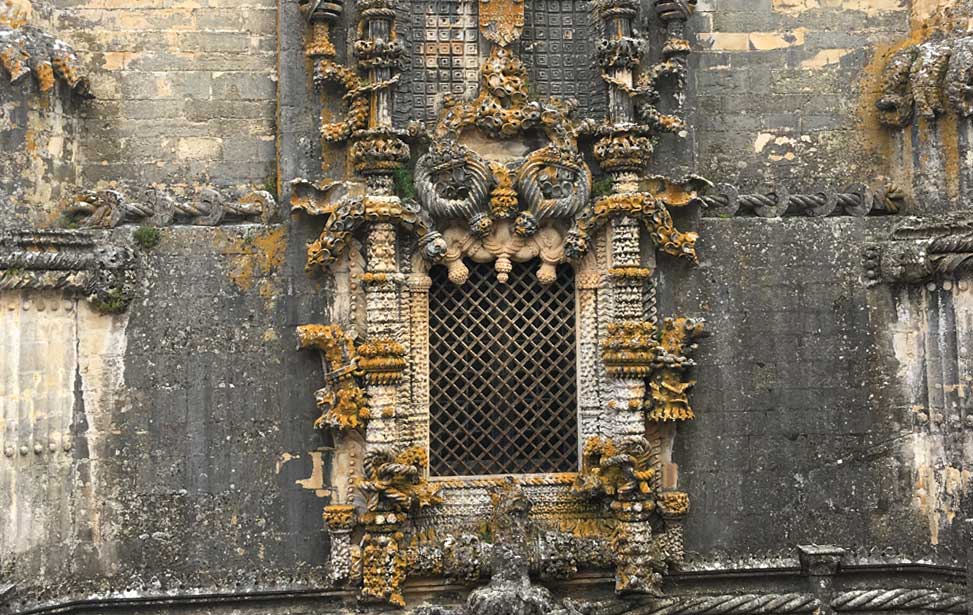 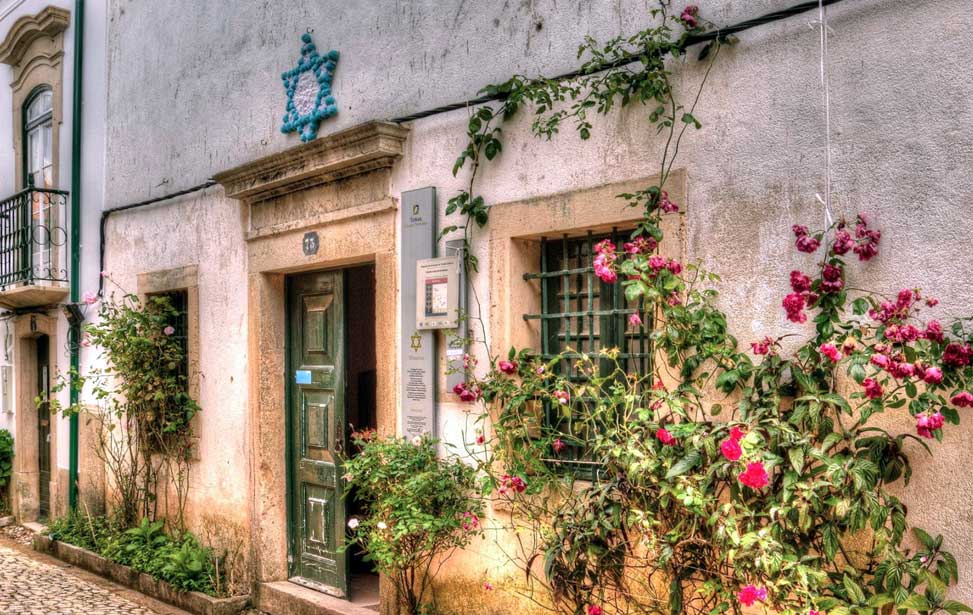 The Templars also sought wisdom from Judaism and when the Jews were expelled from Spain, they founded a colony in Tomar and the synagogue of Tomar is one of Portugal's oldest. Located in the heart of old Tomar in Rua Dr. Joaquim Jacinto it was built between 1430 to 1460 by Dom Henrique and today the building houses the Abraão Zacuto Luso-Hebrew Museum.

Named after Abraham Zacuto (c.1450-c.1522), a mathematician and author of the celebrated Almanach Perpetuum, a book published in Leiria in 1496 that contains mathematical tables largely used by Portuguese navigators during the early 16th century and beyond. The exhibits include various archeological findings attesting the Jewish presence in Portugal during the Middle Ages. Among numerous gravestones that form the bulk of the collection, mention should be made of an inscription, dated 1307, from the former main synagogue of Lisbon, and a second notable 13th century inscription from Belmonte on which the Divine Name is represented by three dots in a manner reminiscent of the ancient Hebrew manuscripts from the Dead Sea. The museum also holds a small collection of modern artefacts describing the Jewish way of life which were donated by individuals and Jewish institutions from around the world. 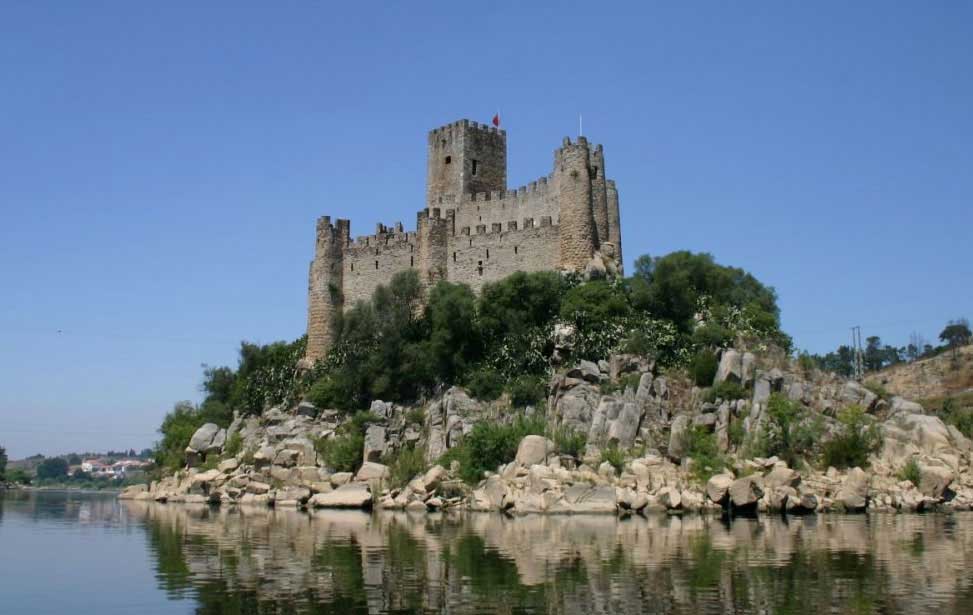 Spend a day in the Portuguese villages of Constância and Tomar to discover the history of the Knights Templar. Your journey will begin in Lisbon. A short distance from Tomar is the Almourol Castle. This emblematic monument was at one time controlled by the Knights Templar. The Almourol Castle and the city of Tomar are perfect examples to understand the mystique of the Templars, men that were simultaneously Warrior Knights and monks that lived under a rigid military discipline, but at the same time with a great rigor in the spiritual life. At the end of the tour you will be dropped off at one of two locations in central Lisbon, either Restauradores or Marquês de Pombal. Please note, this tour is available from Tuesday to Saturday. 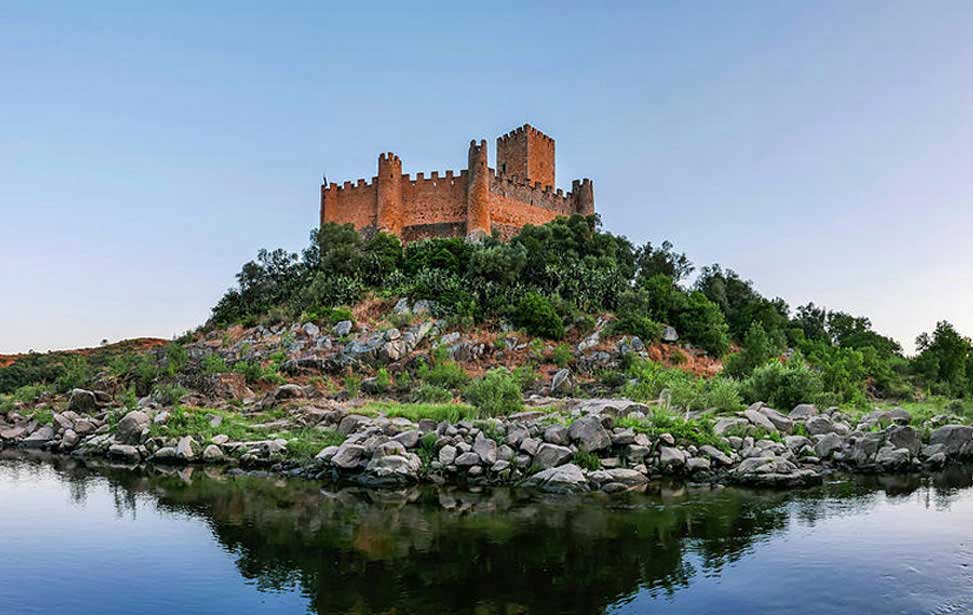 Begin your excursion with pick-up at your Lisbon hotel and board a private, air-conditioned car destined for Tomar, a historic city replete with beautiful testaments to the past. Here, discover the significance of the UNESCO-listed Convent of Christ and delve deeper into the history of the Knights Templar.

See two Templar churches and the Synagogue of Tomar. Then, try some Ginja and go to Constância for lunch. Visit the Almourol Castle and feast your eyes on a fine example of 12th century military architecture. Your tour concludes with drop off at your Lisbon hotel. 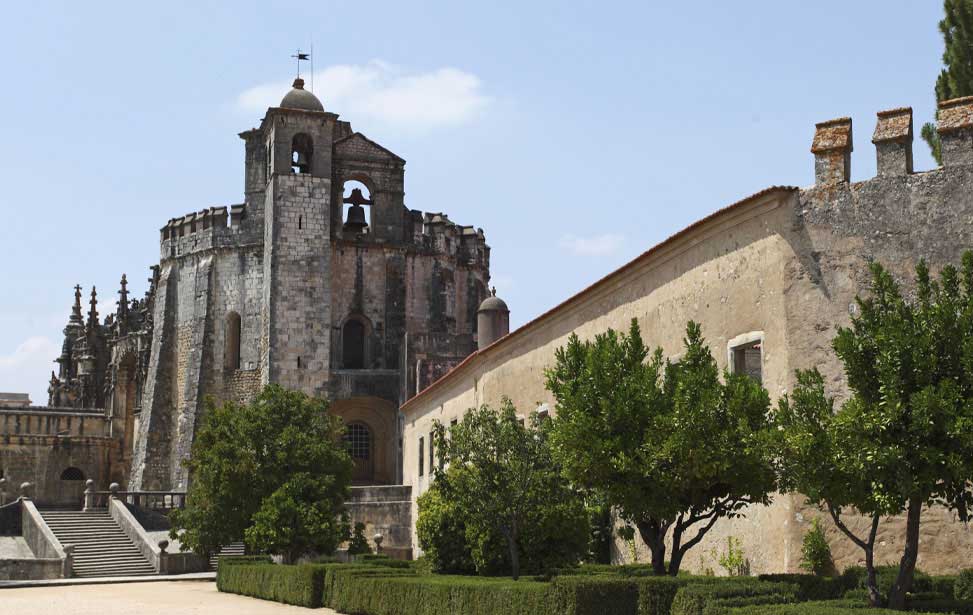 You will begin your tour with a visit to the Almourol Castle in the district of Santarem. It is one of the most iconic examples of military architecture at the time of the Christian Reconquest. You will then visit the Santa Maria dos Olivais Church. The church, also known as the Church of Santa Maria do Olival, is located on the left bank of the river Nabao, in the city of Tomar, Portugal. Next up on your tour is the Convent of Christ. In the center of Tomar, you will be able to visit the oldest Portuguese Synagogue. Its roof is supported by 4 columns representing the mothers of Israel: Sarah, Rachel, Rebecca and Leah, and is linked by 12 arches, symbolising the 12 tribes of Israel. At the conclusion of your tour, you will be returned back to Lisbon.

Originally the Convent drew it's water from springs and cisterns but in 1593 construction began on the Aqueduto dos Pegões and took eleven years to complete. Filipe Terzi began the work and Pedro Fernandes Torres completed it in 1613. At it's highest point it rises to 30 metres high and four miles in length, it consists of 180 arches and 58 arcs bringing water from springs from the northeast. Where the Pegões valley drops down, it forms two rows of arches, the lower ogival arches supporting the continuous upper row. The Aqueduct has been a national monument since 1910 and can be reached by following the road to Leiria.

This little road train has become popular since it's launch in 2000. It runs along two routes, one is a tour around town and the other goes up the hill to the Convent of Christ and Pegões Aqueduct. Although the walk up to the Convent of Christ isn't long it is very steep in places and this Tourist Train offers those with mobility issues or those with aching limbs an easier way to ascend the hill. The train leaves from the Rua Marquês de Pombal and Rua Serpa Pinto. 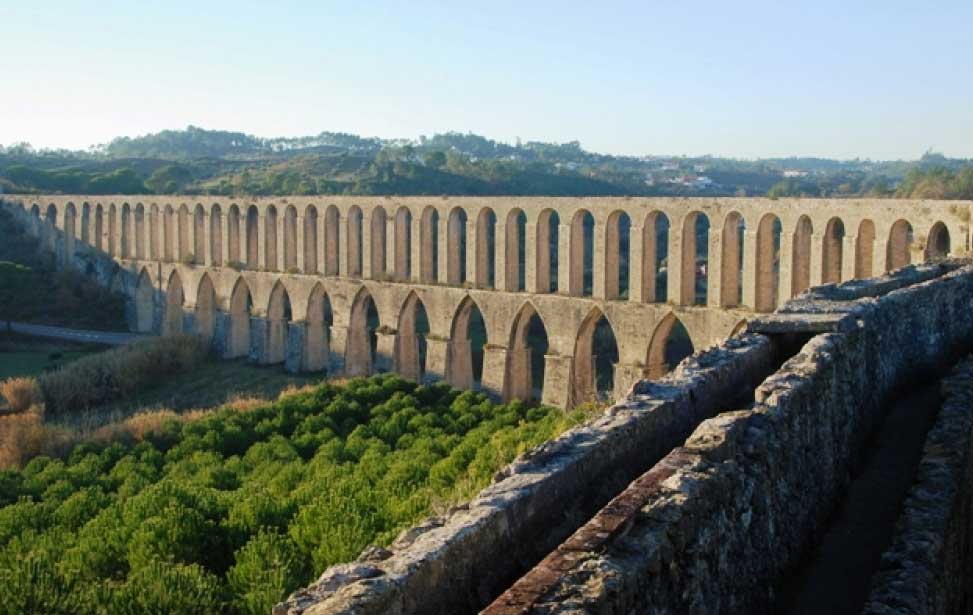 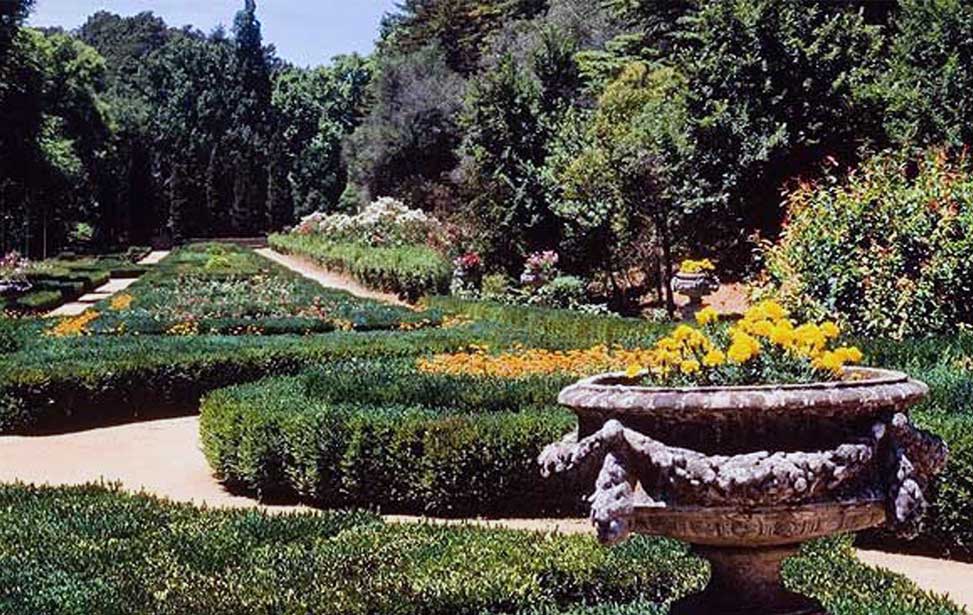 Located at the end of the Avinida Dr. Cândido Madureira, one of Tomar's main streets, the Mata Nacional dos Sete Montes park is Tomar's largest. Covering an area of 39 hectare the park incorporates it's own botanical gardens with many rare flowers and specimens of trees from around the world. The woods include ancient cypress trees, judas trees, oak trees, wild pine trees, stone pines and olive trees. The park also offers a scenic route to the castle and convent complex, to which it's affiliated – was once used by the Order of Christ for agricultural purposes. Paths lead off to springs, secluded corners and monuments, including a model Romanesque church known as the Charolinha, adding to the charm of the place. The park is free and open during the day. 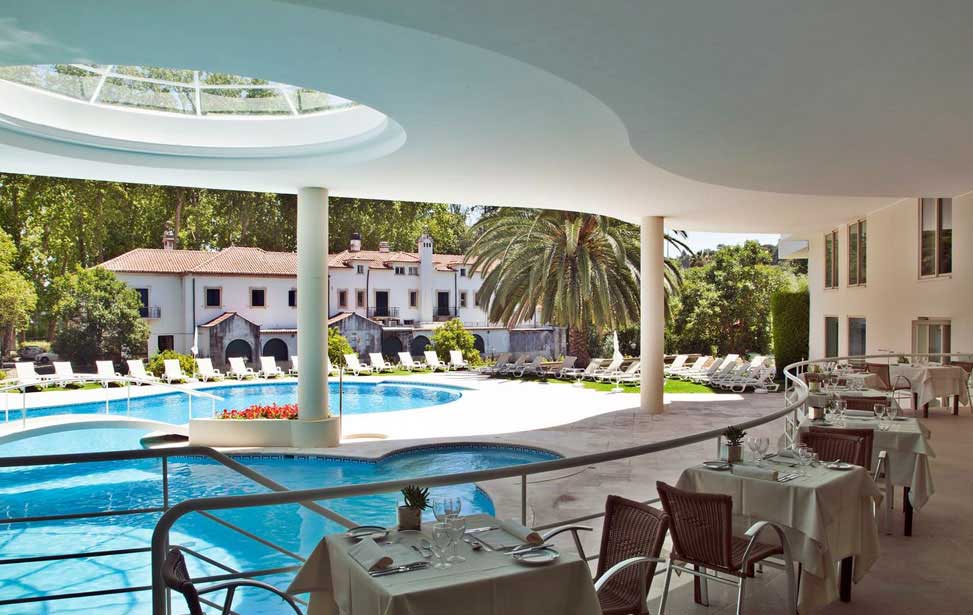 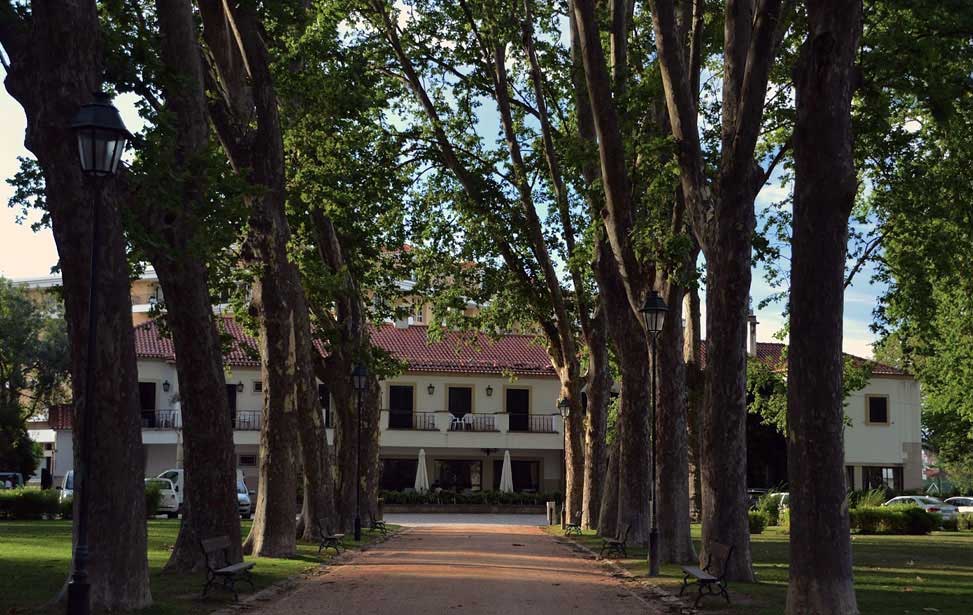 Located in a tranquil location on the island of Mouchão (Mouchão Park) in th centre of Tomar, surrounded by flowers and the romantic landscape of the Nabão river. Under the ever-present shadow of the impressive Templários Castle and the famous Convento de Cristo. The Hotel Estalagem de Santa Iria has 13 rooms and a deluxe suite. Every room has a private bathroom. They are all equipped with a satellite TV, telephone, radio and an early morning call. The hotel has a restaurant, 60 people banqueting facilities, a meeting room for 70 people and a bar with fireplace. 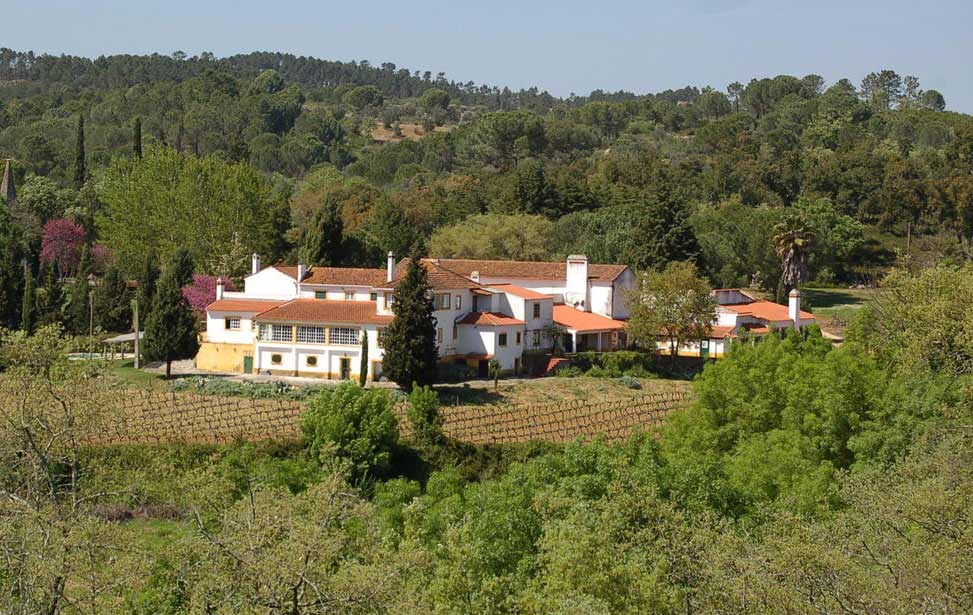 An agricultural property just two miles from the historical centre of Tomar. The farm has a lovely rustic charm together with an elegance and some traces of the 18th century. Spread over a series of cottages with the same rustic and elegant ambiance displayed in the interiors. There is also a swimming-pool. 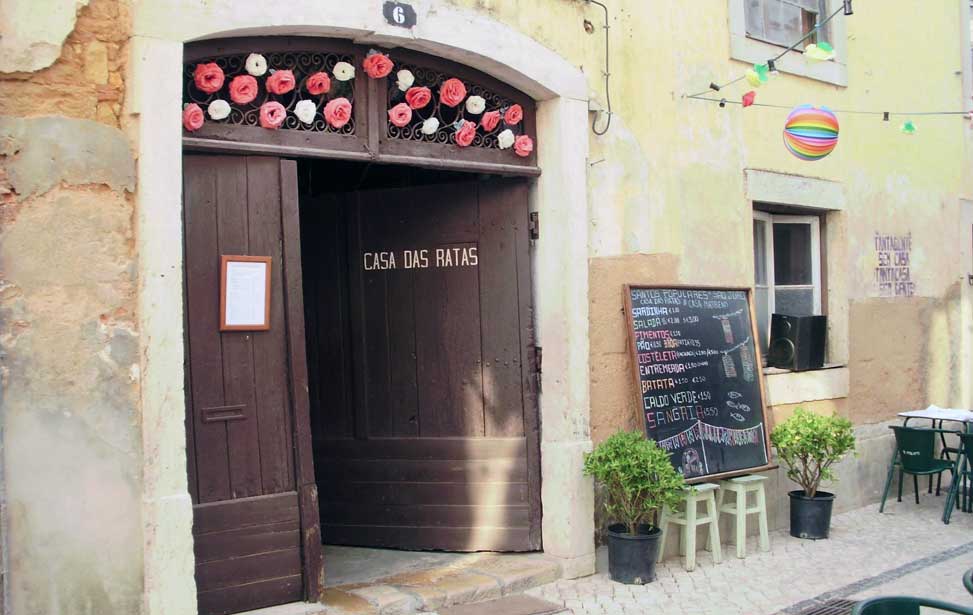 A small yet atmospheric restaurant serving traditional Portuguese food with a contemporary twist. The interior has a old-tavern feel about it and the walls are decorated in wine memorabilia. Taking advantage of great local produce the food is prepared with great skill and served by friendly and helpful staff. It's advisable to book, especially during high season, due to it's popularity. 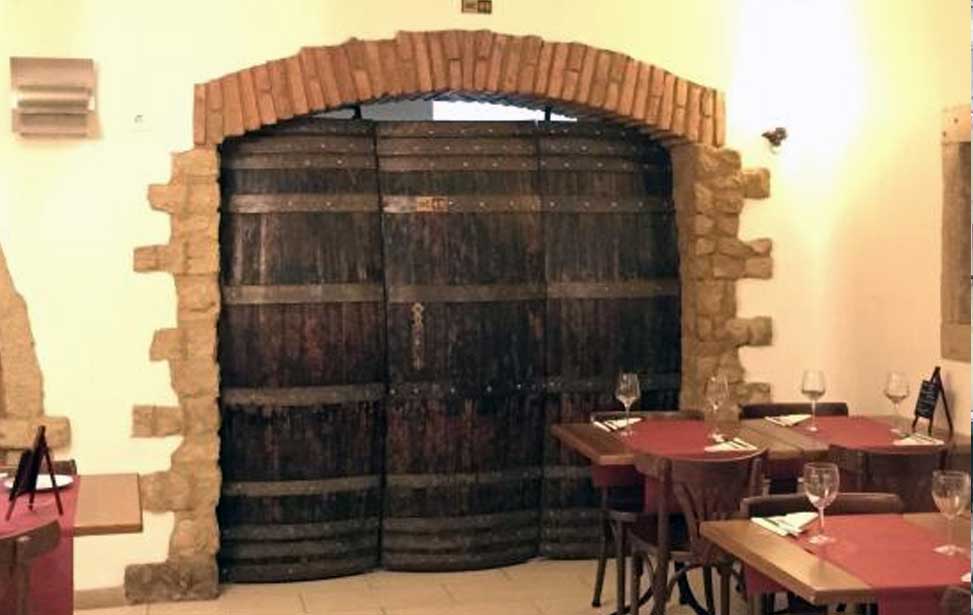 Step through the unimposing entrance opposite the old synagogue into a bright contemporary yet warm and friendly atmosphere. The menu is varied enough to suit most palates with an large selection of deserts. The staff are very dedicated and friendly, well conversed in english to talk you through the modestly priced menu. 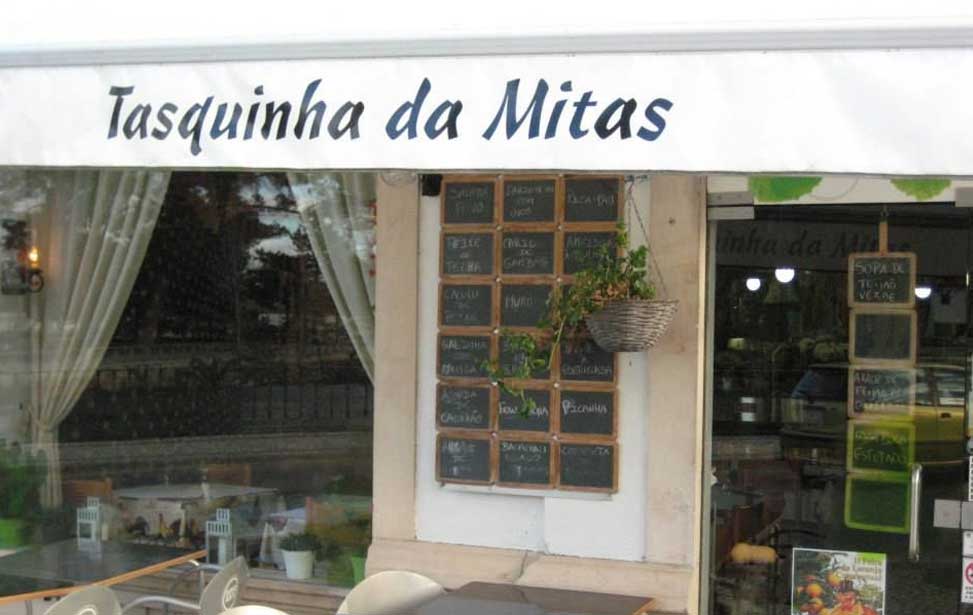 Good honest freshly cooked cuisine, typically large portions, try asking for a meia doce (half portions) if your appetite is as small as the prices here. Outside seating offers great views over the river whilst the staff are helpful and fluent in english.